Minnetonka, Minnesota – March 11, 2014— Communications Systems, Inc. (NASDAQ:JCS) today reported financial results for its fourth quarter and full year ended December 31, 2013 and also reported on progress in implementing its plan to strengthen and revitalize its business that was first announced in September 2013.

President and Interim CEO Curtis A. Sampson commented: “We are pleased with the progress we have made in implementing our plan to strengthen and revitalize the Company and we continue to be very optimistic about CSI’s future. We believe the results we are reporting today reflect positive business momentum on which we can build as we continue to implement our plan. Although we incurred a loss for the year due to a non-cash, largely non-deductible write-off of Transition’s goodwill in the third quarter, in our view, this is not indicative of Transition’s potential for future profitable growth. However, we recognize that we have a number of challenges ahead of us, including challenges at our Transition Networks and JDL Technologies subsidiaries that we discuss below.

Mr. Sampson continued, “We are excited about Suttle’s prospects, as it is actively marketing cutting-edge products that are being well received by Tier 1 telecommunications providers. In a separate press release being issued today, Suttle is announcing its new G.hn home networking platform, which will deliver total home connectivity. In addition, due to the revitalization efforts we began in September 2013, we now have a focused leadership team that is reinvigorating Transition and beginning to achieve operational improvements throughout our entire organization. Our revitalization efforts will include strategic investments at both Suttle and Transition Networks in areas that demonstrate strong potential to enhance shareholder value, particularly continuing research and new product development.”

Suttle
Suttle achieved strong growth in fiscal 2013 posting sales of $54.3 million, a 21% increase over fiscal 2012. Sales to large telecommunications customers increased 29% to $43.3 million in 2013 from $33.6 million in 2012 due to the fulfillment of new product contracts and accounted for 80% of 2013 sales. The growth is attributed to the successful launch of high speed copper connectivity and fiber connectivity platforms for FTTX and Enhanced networks. Sales of structured cabling products increased 49% over 2013 due to an increase in new multi-dwelling unit construction in the U.S. housing market. As a result of increased efficiencies associated with the higher sales level and favorable product mix, Suttle’s gross margin increased to 29% in 2013 compared to 27% in 2012.

Transition Networks
Transition Networks’ fiscal 2013 sales decreased 19% to $43.9 million compared to $53.8 million in 2012. North America sales decreased 22% or $8.7 million in 2013 from 2012 due to declines in Federal government spending and program delays, as well as the maturation of its enterprise/traditional media conversion products for North America commercial markets. International sales decreased $1.3 million in 2013 or 9% compared to 2012, due to currency fluctuations, project timing and continuing economic problems in some markets. Gross margins generally remained steady in 2013, dropping to 51% in 2013 as compared to 52% in 2012. Transition Networks is focused on developing new products for key growth markets. However revenue from the introduction of these new products has, to date, not been sufficient to offset existing market declines.

JDL Technologies
JDL Technologies’ fiscal 2013 sales were $ 33.1 million compared to $5.4 million in 2012 due to substantially increased sales to its two South Florida school district customers. In 2013 JDL recognized $23.0 million of revenue from its participation in the Miami-Dade County Public School District (M-DCPS) “Bringing Wireless to the Classroom” initiative and $7.9 million in revenue from the School Board of Broward County (SBBC). JDL Technologies’ gross margin dollars increased 336% in 2013 to $6.7 million driven by the revenue increase. However, its gross margin percentage decreased to 20% from 28% in 2012, because a higher portion of its 2013 revenue was hardware-based in contrast to its more traditional value-added services. Although JDL Technologies will continue to aggressively pursue opportunities at both M-DCPS and SBBC, it has substantially completed the present phase of its work on the “Bringing Wireless to the Classroom” initiative and other projects, and currently has a substantially lower backlog for future projects. Because federal and local funding for investments in IT infrastructure and services for K-12 schools varies substantially from year to year, there have been large swings in JDL’s annual revenues. We expect this volatility in JDL’s annual revenues to continue in 2014 and future years. Accordingly, in order to reduce its dependence on government funding, JDL continues to aggressively pursue opportunities to provide managed services, migration to the cloud, virtualization and other network services for small and medium sized commercial businesses with a focus on healthcare, legal and financial services markets. Its revenue from these commercial businesses increased to $2.2 million in 2013 from $1.3 million in 2012.

Dividend Announcement
Communications Systems, Inc. also announced that its Board of Directors had declared a dividend of $0.16 per share payable on April 1, 2014 to shareholders of record as of March 20, 2014.

Further Information
Further information regarding the Company’s results and related matters will be provided in the Company’s Form 10-K report for the year ended December 31, 2013, which will be filed on March 14, 2014.

About Communications Systems
Communications Systems, Inc. provides physical connectivity infrastructure and services for global deployments of broadband networks. Focusing on innovative, cost-effective solutions, CSI provides customers the ability to deliver, manage, and optimize their broadband network services and architecture. From the integration of fiber optics in any application and environment to efficient home voice and data deployments to optimization of data and application access, CSI provides the tools for maximum utilization of the network from the edge to the user. With partners and customers in over 50 countries, CSI has built a reputation as a reliable global innovator focusing on quality and customer service. 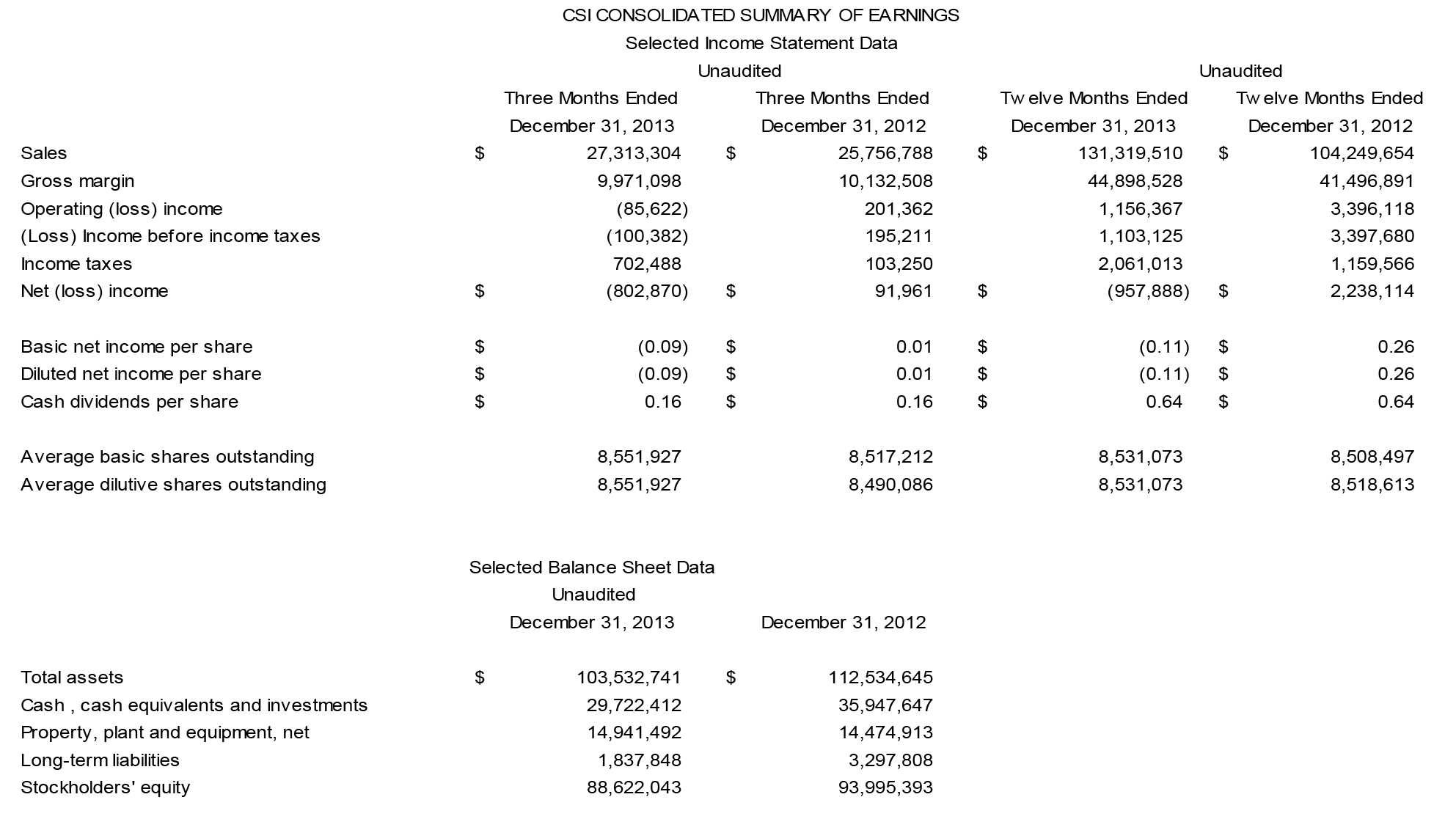