Posted by Pineapple on November 7th, 2013

Chief Financial Officer, Ed Freeman, commented, “The $16.8 million reduction in cash, cash equivalents, and investments from year-end was more than made up by the $22.0 million increase in accounts receivable, primarily due to JDL’s strong sales to its South Florida education customers.”

Suttle
Suttle continued its strong growth with 2013 third quarter revenue of $14.8 million, a 21% increase over the 2012 third quarter. Sales to major telcos increased 31% in 2013 due to the fulfillment of new product contracts and accounted for 84% of third-quarter sales. Sales of structured cabling products increased 54% due to an increase in new multi-dwelling unit construction in the U.S. housing market. As a result of increased efficiencies associated with the higher sales level and favorable product mix, Suttle’s gross margin increased to 33.5% compared to 27.2% in the 2012 third quarter. Chairman and Interim CEO, Curtis A. Sampson, commented, “Suttle continued to carry out its strategic initiative of focusing on the major telcos with products jointly developed with the customers. Suttle’s fiber-to-the-home and other new products are causes for continued future optimism.”

Transition Networks
Transition Networks 2013 third-quarter sales decreased 20% to $10.9 million. The business was affected by the continuing federal government spending decline and the maturation of enterprise/traditional media conversion products in commercial markets in North America. International revenue decreased from $3.3 million to $3.1 million, due to decreased sales in Europe resulting from the ongoing economic situation and slow recovery. In response, Transition Networks is focused on developing new products for key growth markets, particularly the telco market, however revenue from the introduction of these new products has not yet been sufficient to offset existing market declines. Gross margins generally remained solid, dropping slightly to 47.5% in the 2013 third quarter from 48.8% in the 2012 third quarter.
As a result of continued lower revenues at Transition Networks due to a maturing of its legacy products, reduced sales in the federal markets, increased price competition and the delay in launching a new line of products mainly focused on the telecom market mobile backhaul opportunity, the Company analyzed the carrying value of the Transition Networks goodwill. As a result this analysis, the Company determined that the Transition Networks goodwill was impaired and recorded a $5.8 million goodwill impairment charge in the third quarter.
As announced in the May 15, 2013 and September 4, 2013 press releases, the Company has restructured Transition Networks general management and sales leadership to better align its business around strategic objectives and changes in the market place.

JDL Technologies
JDL Technologies’ 2013 third quarter sales increased 575% to $18.9 million due to sales to its South Florida education customers. In the quarter, JDL Technologies recognized $14.6 million of revenue from its participation in the Miami-Dade County School District “Bringing Wireless to the Classroom” initiative and $3.4 million in revenue from other education business. JDL Technologies’ gross margin dollars increased 352% to $3.5 million driven by the revenue increase. Its gross margin percentage decreased to 18.4% from 27.5% in the 2012 third quarter, however, because a higher portion of its 2013 revenue was hardware –based rather than its more traditional value-added services. Although JDL Technologies will continue to aggressively pursue opportunities in the South Florida education business, it substantially completed its work on the “Bringing Wireless to the Classroom” initiative in the third quarter, and does not have a comparable backlog on future projects.
JDL continues to pursue opportunities servicing the small and medium sized business with their networking needs, primarily managed services, migration to the cloud and virtualization. Its 2013 third-quarter revenue from this business increased to $951,000 from $224,000 in the comparable 2012 period.

Corporate Restructuring
As previously announced, on September 4, 2013, the Company implemented a plan to restructure the Company from a corporate-managed “top-down” business structure to a more flexible “bottom-up” organization. The Company believes this flexible structure is more relevant for the entrepreneurial requirements of the three individual businesses in the CSI portfolio. As a result of these changes, the CSI parent company functions have been significantly reduced and are now focused on core functions benefiting the entire enterprise. The Company will continue to support and analyze the three operating businesses in its portfolio.

Dividend Announcement
Communications Systems, Inc. also announced that its Board of Directors had declared a dividend of $0.16 per share payable on January 2, 2014 to shareholders of record as of December 16, 2013.

Further Information
Further information regarding the Company’s results and related matters will be provided in the Company’s Form 10-Q report for the quarter and nine months ended September 30, 2013, which will be filed with the SEC on November ¬¬8, 2013.

About Communications Systems
Communications Systems, Inc. provides physical connectivity infrastructure and services for global deployments of broadband networks. Focusing on innovative, cost-effective solutions, CSI provides customers the ability to deliver, manage, and optimize their broadband network services and architecture. From the integration of fiber optics in any application and environment to efficient home voice and data deployments to optimization of data and application access, CSI provides the tools for maximum utilization of the network from the edge to the user. With partners and customers in over 50 countries, CSI has built a reputation as a reliable global innovator focusing on quality and customer service. 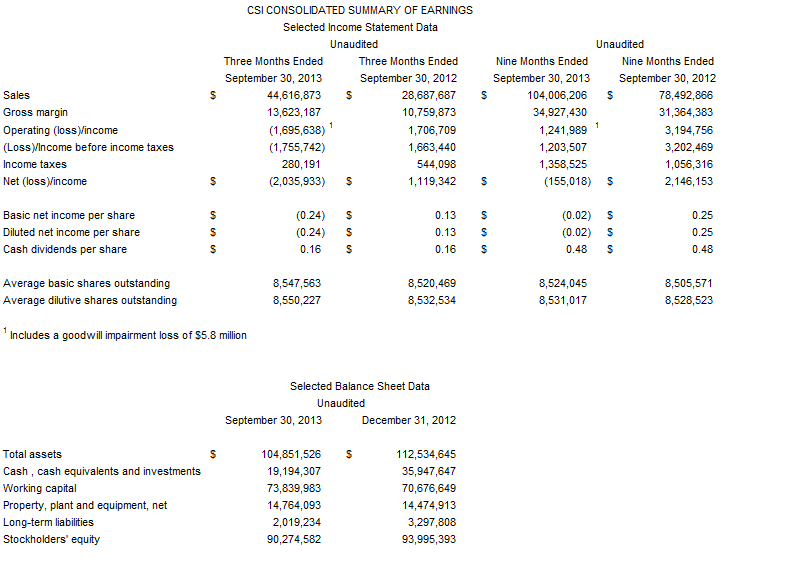