Suttle
“Suttle continued its strong growth by increasing 2013 first quarter revenue to $12.4 million, a 17.4 % increase over the 2012 first quarter. Suttle achieved a significant increase in the sale of its structured cabling products driven by continued resurgence in the housing market, specifically in multi-tenant-dwelling construction. Suttle also increased sales to communications service providers due to new programs to enhance their networks. We continue to invest in the Suttle business to create new products, including fiber optic and copper connectivity solutions. Suttle’s international sales decreased 13% to $1.2 million and accounted for 11% of Suttle total sales, due in part to the phase out of the Suttle Austin Taylor legacy business. We continue to see strong sales opportunities in Latin America, South America, the Middle East and Canada. We have added resources to take advantage of these opportunities and will continue to invest in these markets. Suttle has a strong Telco customer base and is focused on selling new products to existing customers and expanding its products sales to new customers globally.

Transition Networks
“Transition Networks sales decreased 16% to $10.8 million, due primarily to the continued slowdown in government spending and a decline of legacy products, which resulted in a decrease in North American revenue from $9.3 million to $6.7 million. Transition Networks international revenue increased from $3.6 million to $4.1 million, due to increased sales in Latin America and Asia despite decreased sales in the Company’s Europe, Middle East and Africa markets. With the continued uncertainty over federal government spending and declining legacy products, Transition Networks is taking steps to stabilize its 2013 revenues and profitability in a challenging domestic environment.

JDL Technologies
“JDL Technology 2013 first quarter sales increased 481% to $4.2 million due to its involvement in the Miami-Dade County School District “Bringing Wireless to the Classroom” initiative. In the 2012 fourth quarter, JDL Technologies was selected as one of the partners for this initiative, and it recognized $3.2 million of revenue from this program in the 2013 first quarter. JDL Technologies also achieved increased revenues both from expanding its footprint within its existing customer base, and from other new customers. JDL Technology’s gross margin decreased to 17.5%, reflecting the fact that a significant portion of its revenue was hardware-based, rather than its more traditional value-added service. JDL Technologies continues to expand the customer base for its managed services, virtualization and migration-to-the-cloud products and services, and is focused on offering these services to small- and medium-sized businesses in the healthcare and commercial markets.

“On April 4, 2013, our first business unit converted to our new Enterprise Resource Planning (ERP) system. The new system will significantly strengthen our long-term performance by standardizing all CSI business units on a common platform. The ERP system will bring efficiencies in the cycle from product concept to product development to bringing products to market; it will enable us to lower manufacturing costs and better manage our supply chain; and it will give us many tools to provide improved customer service. Although implementing this new ERP system has been a significant investment, we expect to achieve substantial dividends in improved execution and enhanced service to our customers. Our second business unit is anticipated to begin operating on this new system in the 2013 fourth quarter and all business units will be converted by the end of the 2014 second quarter.

Mr. Schultz closed: “We are excited by the continued growth in the Suttle business; it is well positioned in its accounts growth and the expansion of its customer base. We will continue to invest in Suttle to expand its capabilities and expand into new regions of the world. JDL is well positioned to have a strong year with its education accounts and we will continue to invest in the expansion of its commercial business. CSI is also focused on improving the performance at Transition Networks as it works to expand into new markets for growth, offsetting the decline in other parts of its business. Investment is vital for our long term growth and to capitalize on the opportunities in each of our three business units.”

Further information regarding the Company’s results and related matters will be provided in the Company’s Form 10-Q report for the quarter ended March 31, 2013, which will be filed with the SEC on May 10, 2013.

Communications Systems, Inc. provides physical connectivity infrastructure and services for global deployments of broadband networks. Focusing on innovative, cost-effective solutions, CSI provides customers the ability to deliver, manage, and optimize their broadband network services and architecture. From the integration of fiber optics in any application and environment to efficient home voice and data deployments to optimization of data and application access, CSI provides the tools for maximum utilization of the network from the edge to the user. With partners and customers in over 50 countries, CSI has built a reputation as a reliable global innovator focusing on quality and customer service. 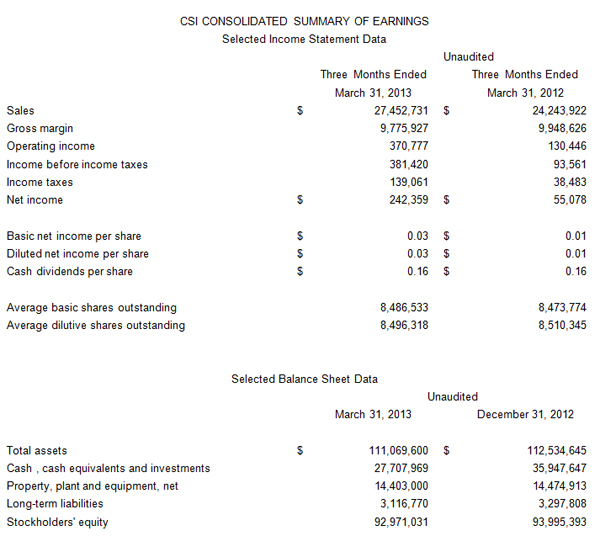