Posted by Pineapple on September 7th, 2012 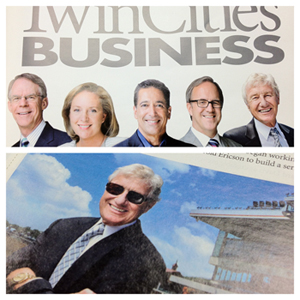 On July 12th, 2012, CSI’s founder and Chairman of the Board, Curt Sampson, was inducted into the Minnesota Business Hall of Fame. The event was held at the Hilton Minneapolis Hotel and included Bahram Akradi of Life Time Fitness, Douglas Baker, Jr. of Ecolab, Richard Davis of U.S. Bancorp, and Sally Smith of Buffalo Wild Wings.

The videos below showcase Curt at the event sharing the story of his beginnings in Hector, Minnesota to the expansion of CSI and rebuilding of Canterbury Park. Additionally, Twin Cities Business Magazine did a full article on Curt in conjunction with the Hall of Fame ceremonies.

“Everyone at Communications Systems, Inc. wants to congratulate Curt Sampson, our founder and Chairman of the Board, on his induction into the Minnesota Business Hall of Fame.  This well deserved honor is a recognition of the many successes Curt has had as a leader and entrepreneur.”